The CSF Oil Cooler product or service has been designed with the latest technology and will perform better than advertised. It is designed to meet or exceed stringent industry standards, making it ideal for your vehicle and lifestyle. CSF's products include parts such as radiators, intercoolers, pressure caps, and oil coolers.

CSF is pleased to announce the launch of its new line of universal style high performance oil coolers. CSF has "reinvented" a common yet critical item, now available in four distinct sizes, with features and benefits never seen before on an aftermarket high performance. CSF also produces Transmission Cooler.

CSF examined all of the oil cooler options on the market and discovered they all have similar designs. They have similar drawbacks due to their similar design. The distinctive bar and plate oil coolers with cast end tanks that CSF chose to design and produce have a much longer lifespan and a higher degree of reliability than custom designs and mounting options that have never been possible.

The "BOSS" Cooler, CSF's first universal style, has been on the market since 2016. Because CSF focuses primarily on direct fit applications, this may be unfamiliar to many. However, this has been the preferred choice in a number of ways for many business insiders and race teams close to CSF.

The oil coolers can be installed in areas with little up and down the surface area due to their longer and shorter rectangular shapes, which also improves airflow to the other cooling system components.

A few of the CSF Oil Cooler's Features:-

In order to fit flush inside Porsche RS/RSR bumpers made in the style of 1973, the newest additions to CSF's Universal Oil Cooler lineup have custom end tanks with a 45° front angle and fittings pointed straight back. These new oil coolers can be mounted left and right, straight up and down, or parallel to the ground when used as a universal fit cooler.

The oil coolers can be installed in areas with a limited up-and-down surface area thanks to their longer and shorter rectangular shapes, which also improves airflow to the other cooling system elements.

The new oil coolers are high-performance universal oil coolers designed for professionals. These coolers were created from the beginning with the plan of being directly installed as a front mount center oil cooler for Porsche 911/930 models (up to 1989). (for IROC-style or almost the same front bumper).

A Porsche RSR's original oil cooler is contrasted with CSF's new oil cooler. The original Porsche oil cooler is more than 30 years old and very hard to locate. On the secondary market, often used RSR oil coolers sell for $3,000 USD. With new technology and improved fitment over the original, CSF has filled the gap left by customers searching for a low-priced choice.

With a tapered tank and a 15-degree inlet/outlet angle, CSF's well-thought-out design is a huge improvement over the heavier hand-held string instrument-style fittings of more than 30 years ago. 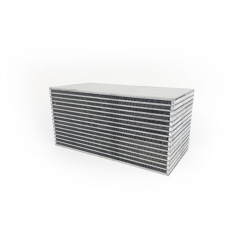 As a result, the oil cooler can now be installed in locations on the vehicle that are smaller or lack a lot of vertical surface area. The CSF oil cooler's long rectangular shape can also aid in preventing the stacking of too many coolers, which might interfere with the flow of air to other cooling system components.

The CSF oil cooler is significantly more strong, more long lasting, and able to withstand higher peak burst rates. This makes it possible to mount the cooler in locations like the front fascia, diff cooler, side vents, etc. where there may be a lot of debris. The type of mounting location is frequently overlooked when using a conventional oil cooler because of the possibility of damage. You can even stand on the CSF oil cooler because it is made to withstand a lot of vibration and debris.

The CSF EVOX's engine oil cooler is made of CSF #8119. The right headlight is mounted beneath the oil cooler, which is mounted in a variety of ways that most conventional oil coolers cannot. Additionally, due to the bar/plate core's strength, it can be installed in locations where a buildup of debris would ordinarily be problematic for fear of failure.